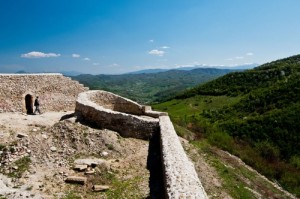 The Old Town of Visoki was a medieval royal castle town built during the fourteenth century, located on the top of the hill overlooking town of Visoko, Bosnia and Herzegovina. The first mention of the town was on 1 September 1355, in the charter “in castro nosto Visoka vocatum” written by Tvrtko I of Bosnia while he was a young ban. The town was abandoned before 1503, because it is not mentioned in the Turkish-Hungarian treaty from the mentioned year. In 1626, Đorđić mentioned Visoki among abandoned towns.

The Old Town of Visoki is located at the top of 213-metre high Visočica hill. Its position provides an excellent view at the plains below. The entry to the castle is on the southwest side, with two lookout towers. Passing through the entry you enter to a part that is called Podvisoki, i.e. to the town that was quite small, measuring 60 meters by 25 meters, and has signs and remains of early medieval houses. The thickness of the castle town walls is about two meters.