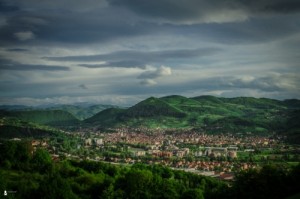 Visoko is a city and municipality in central Bosnia and Herzegovina of rich historical heritage. It was an early centre of the Bosnian medieval state, and the site where the first Bosnian king Tvrtko I was crowned. Located between Zenica and Sarajevo, Visoko lies on the Bosna river where the river Fojnica merges into it. The municipality is organized into 25 local communities. The municipality is administered by the Zenica-Doboj Canton of the Federation, and it is second largest town in the Canton.

The region of Visoko has approximately 46,000 residents, with an estimated 17,000 residents within the actual city limits. With 173 residents per square kilometer it is one of the most densely populated areas in the Federation of Bosnia and Herzegovina.